Meta-analysis is the quantitative combination of results from multiple research studies. There are three steps in a typical meta-analysis model.

Extract individual estimates and standard errors from each study

Combine these estimates using a fixed or random effects model

This page uses resources originally developed on my weblog: November 29, 2004, January 12, 2005, February 25, 2005, and March 11, 2005. I also have a web page about the special problems associated with a meta-analysis for a diagnostic test and a non-technical introduction on the practical interpretation of a meta-analysis.

When you look at the individual summaries in a meta-analysis, they will report the results in a variety of ways. You need to extract these results in a common format, and the process depends a lot on the type of outcome being reported.

For a continuous outcome, a commonly reported statistic is the difference between the treatment mean and the control mean divided by the standard deviation in the control group.

There are some variations on this formula that use a pooled variance estimate or that adjust for biases due to small sample sizes.

The standard error of the estimate is

For a binary outcome, such as mortality, you have several choices. You can compute the risk difference

You can also compute the relative risk, but traditionally, this is transformed to the log scale first.

You can also compute the odds ratio, and this is almost always transformed to the log scale as well.

The standard error of the risk difference is

For the relative risk and the odds ratio, we need to analyze the data on the log scale. The log relative risk has a standard error of

and the log odds ratio has a standard error of

There is no consensus on the best measure among the risk difference, relative risk, or odds ratio. The risk difference has certain advantages in interpretability, but the log odds ratio often has fewer problems with heterogeneity.

Now that you have all the data together, the first thing you want to do is to combine it. In a perfect world, you would think carefully about your studies and the particular meta-analysis model that you want and whether it makes sense to compute any combined estimate at all. Only after a lot of careful thought would you proceed.

But let’s be realistic. You and I are both impatient, so we want to see right away what is going on. So go ahead and compute a simple estimate of combined effect. Don’t get emotionally attached to that estimate, because a better choice might be a more complex estimate or possibly no estimate at all.

The simplest combined estimate is a weighted average of the individual study results. The weights are inversely proportional to the square of the standard error,

which gives greater weight to those studies with smaller standard errors. The weighted average is

where r is the number of studies in the meta-analysis. This is known as the fixed effects estimate. It is a good starting point for further analysis, but after you have taken a careful look at this estimate and the individual studies that go into producing this estimate, you may decide to use a different estimate or dispense entirely with estimating an overall effect.

The formulas for confidence limits for this estimate are simple enough, but I won’t present them here.

Example: A meta-analysis of inhaled steroid use in chronic obstructive pulmonary disease:

showed standardized mean differences (smd) for the reduction in Total Cell counts and confidence limits (lcl, ucl) in six studies in Table 3. I retyped that data in SPSS.

Another example of a meta-analysis appears in

I re-typed the table of odds ratios and 95% confidence intervals into Microsoft Excel.

To calculate a standard error, you first have to transform the odds ratio and the confidence limits to the log scale. I used base 10 logarithms, here but any other type of logarithm will also work.

To compute a standard error, take the log(ucl), subtract the log(or) and divide by 1.96. I could have used the log(lcl) instead, but if you look at the original data, some of the lower limits are 0.01 and 0.02. I was worried that there might be a lot of rounding error in those values, since only one significant figure is displayed.

Next, I computed weights and a weighted sum.

Here is an example of an R program, plus the output using the meta library.

Notice that there is no difference between the random effects model and the fixed effects model. That is because for this data set, there is no evidence of heterogeneity. The Cochran’s Q value is smaller than the degrees of freedom and the estimate of tau-squared is zero.

Here’s what the analysis of the Acetylcysteine data would look like using R and the meta library.

A common way to display the individual study results and a combined estimate of effects is a graph known as a forest plot. An example of a forest plot appears in

and because this is an open-access article, I can reproduce the graph here.

Since BMC Medicine is published with an open access license, I can freely reproduce this image, as long as I cite the source.

I was always confused by the funny squares in a forest plot, so I looked for a description. Here is what the User’s Guide for RevMan (software created by the Cochrane Collaboration) says about forest plots:

The graph is a forest plot where the confidence interval (CI) for each study is represented by a horizontal line and the point estimate is represented by a square. The size of the square corresponds to the weight of the study in the meta-analysis. The confidence interval for totals are represented by a diamond shape. The scale used on the graph depends on the statistical method. Dichotomous data (except for risk differences) are displayed on a logarithmic scale. Continuous data and risk differences are displayed on a linear scale. Generic inverse variance data are displayed on either a logarithmic scale or a linear scale depending on the settings in RevMan. – http://www.cc-ims.net/download/revman/Documentation/User%20guide.pdf (page 36).

Here is an example of the Forest plot, as drawn by R and the meta library.

shows cumulative meta-analysis, which is the cumulated effects over time of studies in the use of erythropoietin (EPO) to treat cancer related anemia.

Since BMC Cancer is published with an open access license, I can freely reproduce this image, as long as I cite the source.

The outcome variable, the odds ratio for whether a patient requires transfusion, showed a significant benefit for EPO. It also shows that sufficient evidence had already accumulated by 1995 to demonstrate this benefit. If such a meta-analysis had been performed back then, there would have been no need to run the additional trials. These redundant trials are bad because they wasted scarce research dollars on a topic where sufficient information had already been accumulated to answer the research question. They are also bad because half of the patients in these post-1995 trials received no treatment or placebo, even though there was enough evidence at that time to show that this is an inferior option.

Some have suggested that any protocol submitted to an Institutional Review Board (IRB) should include a systematic overview or meta-analysis of the previous research (see Chalmers 1996), rather than just a simple literature review, to prevent future IRBs from making the same mistake of those that approved the post-1995 studies of EPO. In some situations, that is definitely overkill, but it is a suggestion worth serious consideration in other circumstances.

Step 3. Evaluate the studies for publication bias and heterogeneity.

and then seeing how much all of these Z-scores differ from zero by squaring the Z-scores and adding them up. This gives you a test statistic, Cochran’s Q,

An unusually large value for Q implies substantial heterogeneity, because you have more variation among the studies than you would expect just by looking at the individual standard errors. If there is no heterogeneity, then Q should be approximately equal to r-1, which implies that the squared Z-scores are, on average, just slightly less than 1.

Many experts have rejected the use of quantitative measures such as Cochran’s Q for assessing heterogeneity and suggest instead that you examine the studies qualitatively and provide a subjective assessment of the degree of heterogeneity among the research studies.

Another alternative is I-squared (Higgins 2003), a statistic that measures the proportion of inconsistency in individual studies that cannot be explained by chance.

Negative values are not allowed for I-squared. If you compute a negative value, set I-squared to zero instead.

I-squared is bounded above by 100% and values close to 100% represent very high degrees of heterogeneity.

where the second component is normally distributed random effect

You can use the Method of Moments and Cochran’s Q statistic to estimate the between study variation:

Notice that the numerator is a measure of how much the Cochran’s Q statistic exceeds its degrees of freedom. If you get a negative estimate here, simply replace it with an estimate of zero.

where w~i~ are the weights used in the fixed effects model.

These weights are going to be closer to uniform or equal weighting than the weights in a fixed effects model. If you think about it long enough, this is actually quite intuitive. In a model where the study heterogeniety is large, large enough to dominate the standard errors, you effectively have a random sample of studies each of which is more or less identically distributed:

The funnel plot is a graphical exploration of the study results looking for evidence of publication bias. An example of a funnel plot appears in 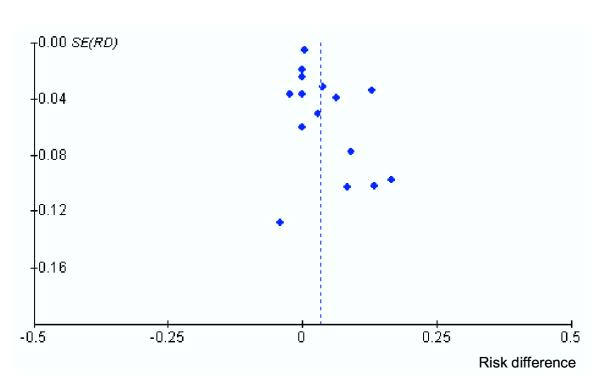 Another funnel plot with conical guidelines superimposed appears in 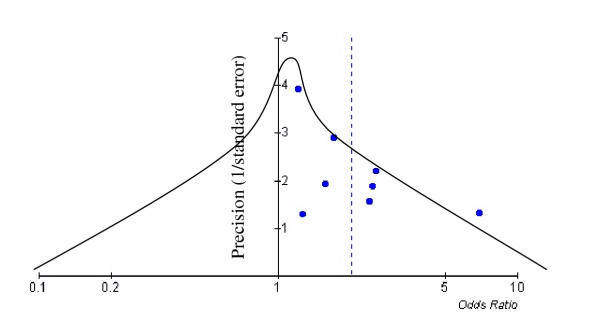 Interestingly enough, most of the meta-analyses published in Biomed Central had the following statement (almost word for word)

Publication bias was not assessed using funnel plots as these tests have been shown to be unhelpful.

These articles then cited the following two references

I have not yet read these articles, but I would agree that the funnel plot is often difficult to interpret. There are some numerical summary measures that try to quantify the departure from symmetry in the funnel plot, but these measures may also have problems.

The trim and fill method uses the funnel plot to try to estimate the missing unpublished studies. In this approach, studies that are asymmetrically distributed (that have no matching study on the opposite side of the funnel plot) are removed from the plot. Then the funnel plot is filled in using symmetric pairs from the trimmed study. This produces a funnel plot with extra imputed studies that make the plot symmetric. The trim and fill method is quite controversial and should be considered an exploratory approach. If, for example, you use this method and the overall estimate changes by a trivial amount, then you have indirect evidence that publication bias did not seriously influence your outcome.