The National Institutes of Health has shown a recent interest in “big data.” You can define big data in several ways, but a common characteristic is the three V’s. Big data takes up a lot of space (volume) and/or it comes at you very rapidly (velocity) and/or it comes in a wide range of differing formats (variety). One of the recent Requests for Applications (RFAs) from NIH spells out what types of research into big data that they are interested in seeing. I might be interested in applying, and would love to find some collaborators. Here’s a summary of what the RFA is all about.

The RFA<U+00A0> calls for “the development of innovative approaches to tough problems.” You don’t have to have “fully hardened” software, but you do need to demonstrate proof of concept. NIH stresses repeatedly throughout the proposal of the need to address biomedical data.Your application needs to fit into one of four areas.

I may or may not write a grant in response to the RFA, but even if I don’t, it was worthwhile to read the RFA to see four areas in big data that NIH sees the need for more work.

You can view the full RFA at http://grants.nih.gov/grants/guide/rfa-files/RFA-HG-14-020.html. 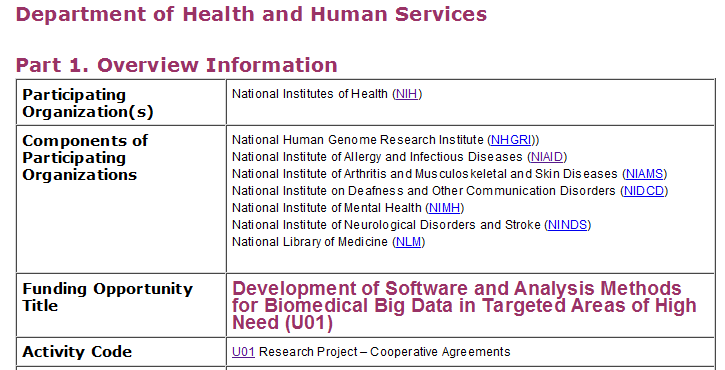